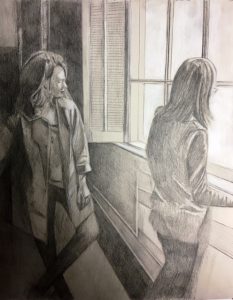 But be sure of this, that if the head of the house had known at what time of the night the thief was coming, he would have been on the alert and would not have allowed his house to be broken into. Matthew 24:43

I have an insidious, wicked, intelligent enemy who wants to steal, kill and destroy me.  John 10:10.

He has wanted to kill me since my birth.  As my Heavenly Father has always had a plan for my life, the enemy has, too.  Unfortunately, I never took him seriously.  I did not know how he operated.  People die for lack of knowledge.  Hosea 4:6.

This daughter of Elohim was not on guard.  I did not watch.  I was clueless.

Be sober-minded; be watchful. Your adversary the devil prowls around like a roaring lion, seeking someone to devour. 1 Peter 5:8

A year ago I was packing for Europe.  I got all my prescriptions filled — narcotics, muscle relaxers and antibiotics.  I packed Motrin, Advil and Benadryl for a sleep aid. What a mess!

A year ago I was addicted to my chiropractor and my massage therapist. And if they were not the answer, nutrition and exercise were.  I was dependent on everyone and everything EXCEPT my God, Jahovah Rapha.  This fact dawned on me one day while on the phone with my sweet mentor.  I remember telling her that I would give God a week, because I needed to go under the knife for yet another injury, a torn rotator cuff. You know how once you say something out loud, you realize how ridiculous it sounds?  Bingo!  I had been playing phone tag with the orthopedic surgeon’s nurse to schedule surgery, but she would never call me back!  She would not call me back because my Father was going to heal me. He healed my shoulder (as I repented of bitterness), my stiff neck (as I repented of being stiff necked and rebellious), and an eye issue (which arose from having a plank in my eye).  My God has even been my chiropractor!  I can now read his word and lay down on a bench and even my three-level fusion pops!  It is wild.

Because I had not been watchful and had not guarded my heart, I put up with the spirit of infirmity that is not of YHWH. My sins and generational sins opened the door to it. I put word curses upon myself and agreed with them when they came from others.  What a lie!  The enemy is the father of all lies. Yeshua (Jesus’ Hebrew name) came to give me abundant life.  John 10:10.  The enemy had crept in and did not want me to know that my God’s Words are life to those who find them, and health to all their flesh. Proverbs 4:22.  The enemy did not want me to know that by Yeshua’s wounds, I have been healed. 1 Peter 2:24.  I know it now!

I did the above graphite drawing to remind me to watch.  I have like-minded friends who stand guard with me.  Thank you, Father, for showing me how to watch and for healing me!