When I was in high school my freshman year, I took a beginning journalism class.  I learned how to write a lead using who, what, when, where, why and how.  By the time I was a senior, I was the editor of The Senator News and working part time at the Nevada Appeal, the local newspaper in Carson City, Nevada. I won a press award at the University of Nevada Reno and was set to attend there to major in journalism. I was “Joe Journalist”.

My professor in Reporting 101 class was crabby and stern.  “Go get a story,” he bellowed, expecting us to run around the campus, interview people and report back to the classroom, pounding out the story before the end of class.  It was hairy.  Two problems arose. First, I was more of an intellectual thinker. I wanted to chew on the information a while. Cranking out quick stories was torture. Second, I was shy and not aggressive. I could not see myself knocking over people to get the interview.  I was just too introverted. I soon doubted if I was cut out for straight reporting. My favorite part of journalism was writing feature stories about interesting people.  I did not mind interviewing folks in a one-on-one session, asking them thought-provoking questions, and observing them.  Unfortunately, in the journalism world, everyone has to start out being a reporter.  I recalled my days at the Nevada Appeal and remembered the stress and cigarette smoke filled newsroom around press time.  Not really me.

After trying my hand at Marketing and Advertising classes (too much like business…definately not me), I switched my major to political science and took a minor in journalism.  I never wrote another newspaper article again.

I have been thinking about journalism again for several reasons. First,  I read a blog by a high school friend Michael Douglass that a teacher died. This teacher got us both writing. Mike still writes and is extraordinary. (See his blog http://www.brainspank.org).  Second, I have been surveying my work.  Every once in a while you have to look at what you have done in order to figure out where you are going.  Third, I went to an art show at the Lyndon House Arts Center in Athens, GA.  I had submitted three paintings, but they did not get in.  Rejection is the ugly part of being an artist.  They make you feel a little better and tell you that over 900 paintings were submitted and only a little over 200 got in, but I had to go to the show and see for myself.  As I looked around, my mouth flew open.  The work was crazy creative, provokative, and undeniably different.  Hmmm. Yes, I have done some abstracts, but I do not know if that will ever be me.

And so I have been mulling over this very thought lately:  Maybe I am still a journalist.  A feature writer without words.  I throw my twist on the subject, increase the intensity, and play with the colors, but it boils down to the fact that I want to show something about someone.  I stop a scene in time that touches me.  I want to share it with the world.  I hope that when I do share it, it may make a difference in some small way. 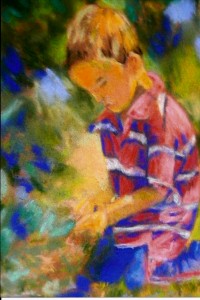