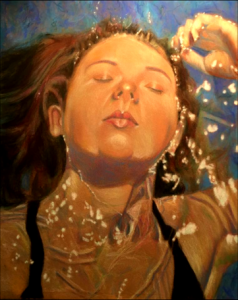 It took me a long time to paint this.  I had good intentions.  It was a productive photo shoot by the pool.  I scored on the photo references.  How could I not?  She is beautiful.  But still.  I simply could not.

I cried in her room.  It smelled of her candles.  I washed the sheets, cleaned the carpets, moved the nightstand.  But her essence was still there.  I shut the door to her room upstairs and left it alone.

So I tried again later.  It was painful.  As layers developed, I prayed, reminisced, smiled, then prayed some more.  I could not do her justice.  I could not contain her.