For now we see through a glass, darkly; but then face to face: now I know in part; but then shall I know even as also I am known.

I have students smarter than myself. It happens all the time. I have come to accept it. In a speech class I had a student who spoke of quantum physics and dimensions. I really had no idea what he was talking about. I did not even pretend to understand. He got a good grade.

I have just recently come to realize that our God of Abraham, Issac and Jacob is so multidimensional that I cannot comprehend or imagine. He is omnipotent. He knows the hearts of all men. 1 Kings 8:39. He created time and acted before time began. Jude 1:25. The Lord said in Jeremiah 23:24: “Can a man hide himself in secret places to that I cannot see him? Do I not fill heaven and earth?”

Our God is multifaceted and complicated. His thoughts are not our thoughts. His ways are not our ways. Isaiah 55:8-9.

So, needing to cleanse my palate after my previous work involving 17 figures in great detail, I took on an abstract on canvas to play with the multidimensional character of God that we cannot see clearly. I painted layer upon layer of lines and shapes, then lathered a cool blue and created textures with paper. I am sure that I have fallen woefully short, but I had an abundant time in the studio.

My son, do not forget my teaching,

but keep my commands in your heart,

for they will prolong your life many years

and bring you peace and prosperity.

bind them around your neck,

write them on the tablet of your heart.

Then you will win favor and a good name

On a Friday morning I heard silence, then two gasps on the phone as I gave a spur-of-the-moment, vulnerable revelation that my heart is art and God combined together. On the following Monday I found myself parked at the college. My Father was up to something BIG. I had no idea what, but He delights in blowing my mind. I took a breath and sat in my car for a minute, then got the nerve to head into the building with a bit of trepidation. I stopped by the restroom on the main floor, felt spinning in my head and inadvertently left my phone there.

As soon as we sat down, she touched my hands and instantaneously prayed for them and for me. We discussed ideas and discovered Father’s commission was for me to show “favor” in an art piece. She gets instant downloads from Him. I had seen it before. She left the room and came back in with a big download. She left again and I felt paralyzed. It took me a long while to get up. I had a “deer in the headlights” look in my eyes.

After the meeting, I searched for my phone to no avail and was completely turned around. I felt like an idiot. Warring in my head was beginning. The enemy was insidious. “You are going to screw this up. You are stupid. You are not an artist. You are a fake …” blah, blah, blah. His workplace is in our minds.

I walk the dogs and pray in the mornings. I was at the turnaround point when Father had something so say after I finally stopped talking. “Do you even know what favor is?” he asked my heart. “Are you ready and willing to receive it?” W-H-A-T????? It was like that first time I met with my mentor. A few minutes before I met with her at the mall I had smartly texted her, “Are you ready for me to pick your brain?” She responded with, “Are you ready to hear what I have to say?” W-H-A-T????? So I was convicted that I did not know what favor was. Worse, I was convicted that I was not good at receiving from my Father. It was a blow with a sting followed by tears, but a good one.

I started my search in Strong’s Concordance. I looked up scripture after scripture. As I was collecting knowledge, I collected photo references. I gathered some eager teenage students and asked them to model for me. I asked the girl group first. I asked them to pray and read. Then I asked one to show what it is like to be “pressed.” Oh my, I was stunned. How did she know? Perfect! Then I got brave and approached the athletic guys in the parking lot tossing around the football. My heart welled up when they knelt with such masculine humility. I was mesmerized and inspired!

Then came the phone call with a dear sister who is usually sparking with fire. Pop, pop, pop. She kept going on and on about how she was a daughter to our Father and not a servant. It was contagious. She showed me that I was not painting “for” the Father as a servant but “with” the Father as his daughter. WOW!

I spent a good week positioning the players in the painting. As I was focusing on design, God was focusing on things of which I was unaware. I took a break for the Sabbath but went down in that Saturday morning to read in the studio and sneaked a peak. Wait! I counted the people in His hands … seven! The number for completion! I had not planned that! The number of the onlookers was 10, again, a very biblical number. The number 17 was also significant! He was co-laboring with me!

As I painted layer upon layer, the painting was coming to life. The thought attacks were plentiful …. “You are going to spill coffee on this … It is going to rip … You can’t do this … ” Knowing that Father was painting this with me was a game changer, however. If this was His commission and he was with me, those things were NOT going to happen.

I decided to leave part of the painting in black and white and part in color. When we have our Father’s favor, we are full of color! He shows favor to those who are humble (Prov. 3:24). He later reminded me of a dream of a painting I had that was black and white with just a little bit of color. Now this painting had more people in color! I had forgotten about that dream.

Upon completion of the painting, I also noticed another thing that my painting partner had mastered. The postures of the saints were ordered. First is reading the Word, then praying, then pressing, then being overwhelmed and prostrate, then resting. The seventh figure was resting! The seventh day is a day of rest! Wow!

There is head knowledge. Then there is heart knowledge. Yes my Father commissioned me to paint this painting, but he also wanted to teach me about favor in a real and personal way. He is with us, He looks at us, He delights in us, and He is near. I know that now. That is favor indeed!

I dreaded this medium. My worst. The one I stumble and grope around with. It is strange and unsettling to use these quick-drying paints. Brushes are hard to control. A stray hair sends dribbles to forbidden places. You have to grip the tool loosely, then tightly, then twist it, then straighten. It makes a displeasing sound on the canvas. And then the mediums to add … a bit of a mystery. Not too much water or it will break down the paint altogether. And blending … egad!

I began with a gray value study. I blocked in the blacks, the medium values and the lights. I squinted to see the shapes come alive.

Now the color. I used a fatter brush than normal so I would not fall into worrying about too many details. I became looser and more like myself. I did know some stuff. I did have some foundation.

I knew I needed to unify it. Then came the grand finale. I was not afraid. That is the great thing about painting in an unfamiliar territory. There is nothing to lose. There are no expectations. There is room to experiment. So I used a glossy glaze with yellow and went over the top of it all.

For those who have followed my blog for a while now, you know my Father is showing me many spiritual lessons. Like painting with acrylics, I am learning as I go. I do know some stuff, but he is adding to my knowledge so that things seems strange, unfamiliar and a bit awkward. I am learning to share my faith with the ebb and flow of the Holy Spirit. I am learning to listen to my Father’s voice. I am learning how to intercede. I am learning about healing, both inner healing and physical healing for myself and others. I am doing things that are so very unnatural like kneeling in a hospital room and praying (no matter who is watching), like touching people, speaking truths and blessing people (even to the point of provoking tears on my part and the part of others).

So I am learning to like this mysterious medium of acrylics. I have a lot more learning to do, but it is quite an adventure. 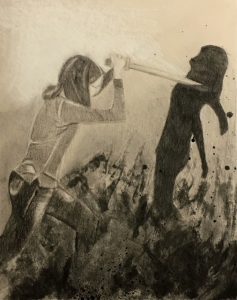 And cloaked my identity.

You embedded a hook;

You encroached with greed;

My Father did heed,

I was mounted to my feet,

And infused with power.

I committed to eradicate,