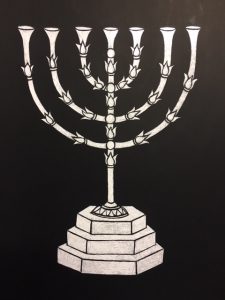 Again Jesus spoke to them, saying, ‘I am the light of the world. Whoever follows me will not walk in darkness, but will have the light of life.’ John 8:12

In December during my sabbatical, I was struck with Mary’s response to the angel in Luke 1:38: “Behold, I am the servant of the Lord; let it be unto me according to your word.” I was so moved, it became my morning prayer, usually uttered out loud while walking the dogs.  But this prayer — kind of like praying for patience — was powerful, and my next menorah assignment was the most precise and confining creatively.

I began by composing an image from my examination of the scriptures outlining the golden lampstand (also called the Lamp of God in 1 Samuel 3:3). I had noticed that my Father had been asking me to go deeper with each menorah and each medium would allow for greater details.  The first, chunky mosaic tiles, gave an outline form.  This last mosaic was reserved to show the real deal.  Though Moses had a heavenly pattern revealed to him on the mountain (Hebrews 8:5), I did not.  Lord, help me to do this.

Up to this point, I was least familiar with scratch art as a medium.  One false move and you start over.  You have to think opposite of drawing, and you scratch away to get the white, but you leave parts you want to be black.  It is like working with your brain torqued, twisted and tied up.  The instrument used is a stick with a sharp end smaller than a mechanical pencil.

My scratches had to be small and deliberate.  No wild strokes.  Self control.  My breaths were shallow.  I had to take breaks.  An old injury surfaced dating back 25 years ago.  Back then I was young and a go-getter, but also rather careless.  I had interrupted my workout to help a girl at a Marine Corps gym and pulled a pin out of a stack of weights only to have 160 lbs drop on my thumb to dislocate it.  (And, yes, it was very embarrassing to leave that gym on a stretcher with muscle bound and manly Marines looking at me.) Scratch art was painful.  My wrist ached from gripping too tight. However, I was determined not to have to do this piece three times like my gold leaf fiasco.

During the scratch, scratch, scratch, I had plenty of time to ponder.  I imagined Bezalel working on all manner of crafts while being filled with the Holy Spirit.  I thought about how my Father’s instructions were given for a reason, and how He gives beneficial instructions, even instructions for worship.  I contemplated that there really are only two kingdoms, the kingdom of light and the kingdom of darkness.  Finally, I thought about how Jesus said he was the light of the world, but he also said that we who follow him are light of the world (Matthew 5:14). Wow!

When finished, I smiled.  I think my Father did, too.  It was time to move on to a new subject and yet another medium. 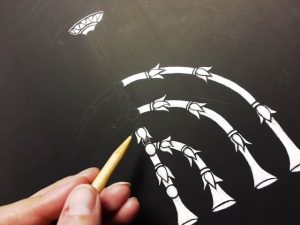 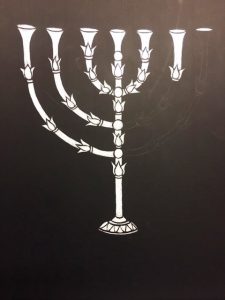